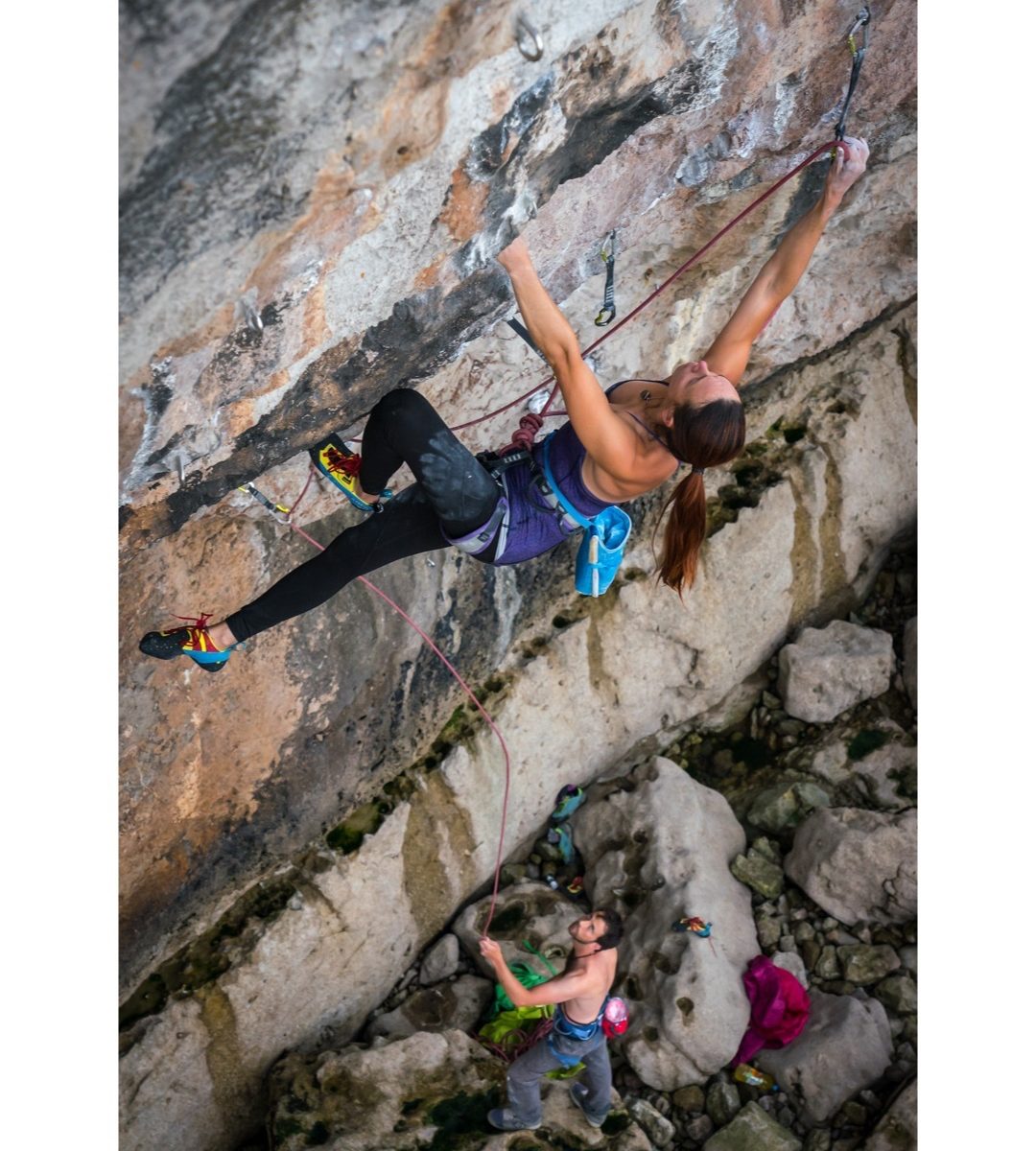 Like many parents, I owe so much of my learning to my son; Sam. The sheer intensity of my passion and love for him, and the resulting attention I paid to him and his experiences have taught me a lot. Watching him learning and exploring adventure sports was both terrifying and exhilarating. I tried to stop myself telling him to ‘be careful’ and I revelled in our shared experiences and his sheer joy and ability, despite him becoming more proficient than me at everything except horse riding, by the time he was just 18 years old.

Despite growing up in Llanberis, Sam’s interest in climbing only started when he attended university at Imperial College London. Once he finished university in London, Sam started a masters’ degree in Bangor in Applied Sports Psychology and moved back to North Wales. Much time was then spent bouldering and climbing on the fabulous range of natural climbing venues for which North Wales is justifiably famous. This was supplemented by indoor climbing and regular trips away. Damp days were often spent bouldering in the shelter of the fiercely overhanging Parisella’s Cave in Llandudno.

Problems that were initially impossible to get off the ground would surrender to time, intently watching and exchanging beta with other climbers, experimentation, and deep deliberate practice. The intensity of practice was matched by the camaraderie of the groups of climbers. To me, as an occasional visitor, it reminded me of the days when a much younger Sam and his friends would spend hours and hours working skating moves on a rail set up in our garden.

One day Sam ventured down to the sea cliff of Lower Pen Trwyn (LPT) to try his hand at some of the sport routes. After warming up on an easier climb, he decided to try Night Glue. This classic F7a+ starts out with steep moves on good holds and then the cliff becomes less steep and the holds get smaller, finishing with a few thin moves to the lower off. He set off on-sight (not knowing the sequence, or having previously tried any of the moves) in the hope that the skills he had developed at Parisella’s would be sufficient to get him to the top.

Although relatively easy, the steep moves at the beginning quickly began to tire his forearms. After the steep start, the headwall is only slightly overhanging, giving Sam a chance to rest on some moderately sized crimps. He then made his way up the overhanging face on small, meandering holds, moving fluidly, conserving his energy as much as possible. I stood at the bottom of the route with Rocio, watching (and belaying) intently.

On reaching the crux he couldn’t see how to climb past it to the top. With rapidly tiring forearms, he shouted down to Rocio to ask for advice. Rocio had climbed the route earlier that day and she had used a dynamic move to get past the crux by throwing for a crimp. Sam was not confident he could make such a move. Instead, he quickly opted for a different solution. Realising he could get a high foot and rock-over in the general direction of the hold that Rocio had described, he went for that, hoping that he would be able to inch his way up until he could reach the crimp.

Sam pulled through the crux and cruised to the top. He had a big grin on his face when he reached the ground. Although he’d been bouldering pretty hard at Parisella’s, this was his first flash (not on-sight, since Rocia had shouted up some advice) of a F7a+ sport climb. It was a good day.

What information was Sam using?

Sam had been confident of trying an on-sight ascent because of the time he had spent at Parisella’s. He was sure of his ability to read and understand the features of the rock. However, the limestone in Parisella’s is actually quite different to LPT, with the bouldering taking place on very steep ground and often using flat holds or even drilled pockets, whereas LPT is natural sea cliff limestone and is sharp and rugged with only small crimps and edges.

With our shared passion for sports psychology and skill acquisition, we talked through his climbing experience later that day. The bouldering had been useful for developing the strength needed to pull through the steep early section of the climb and for him to be comfortable standing on the small polished (i.e. slippy) limestone footholds at the Great Orme. But, Sam realised that he would not have been able to flash Night Glue if he hadn’t developed route reading skills and endurance from face climbs on rhyolite in the Llanberis Valley. Without his previous training on indoor sport climbs he would not have learnt to use, and develop the endurance required to recover on the small holds. Finally, the crux was overcome by a move which he’d perfected on the slate cliffs of the Dinorwic quarry, where he had become very good at high foot rock-overs on tiny edges.

The extensive hours of climbing on limestone and in other environments had given Sam a deep and detailed understanding of the rock. It had also developed his understanding of his own climbing abilities and what features he could and could not use across a range of rock types. This had honed his ability to link the perceptual information available to him, to tactical decisions and movement outcomes, both consciously and unconsciously. He was learning to recognize the rock features and affordances.

So, what do we mean by the term affordances? This is a concept coined by the perceptual psychologist, James Gibson to explain how we individually make sense of the world around us in terms of what movement and actions we are offered (afforded) by the environment in which we find ourselves. For each of us, these are unique, but many basic ones are shared because we share many experiences. We are also, as a species, attuned to pick up the same perceptual information (more or less).  The features that most climbers use are very similar; the easiest and most obvious lines up the rock face and the most efficient ways to move through the features. These affordances are perceived directly and much of our movement requires no conscious control.

Some of these affordances are shared between the climbers, others are not. Climbing, watching, listening, sharing ideas with the other climbers with their different physiologies, strengths and levels of ability, had given Sam the opportunity to experience a hugely rich variety of movement solutions. Due to the difficulty of the bouldering at Parisella’s, time there is often an experience shared with many exceptional climbers. Sometimes watching the other climbers generated entirely new opportunities for Sam. It offered creative solutions that he had never even thought of, firing his imagination, inspiring, and offering new possibilities.

Working a boulder problem is a great example of highly motivated, highly autonomous, deep practice. It necessitates spending a lot of time in the ‘ugly zone’. Trying, failing, exploring, failing again, until the rock becomes intimately known. How it feels to touch, tiny features, the effects of small temperature and humidity changes, the afforded rhythm and musicality. When you can pause on a feature.  When you need to move through it. Timing the transfer of power from hold to momentum. The spontaneous jolt of sheer, systemic exhilaration when a move works and feels fluid. Both Aled and JD (in part 1) described worlds that they were tightly attuned to, and Sam’s description of his bouldering experiences made me think back to those conversations. Sam was becoming skilful through developing affordances; his ability to perceive the rock in great detail and use and interact with the features that he perceived.

On Night Glue, Sam had asked for beta from Rocio to allow him to reduce the amount of information available and make a quick decision (before he pumped out and fell off). However, the moves that Rocio had used to get past the crux were not available to Sam. He did not have the same skills or perception-action coupling to be able to capably mimic what she had done, but her advice did help to focus his efforts towards reaching a specific hold. And he was then able to adapt experience from another environment and rock type to develop a solution to the problem that he faced.

In this example, Sam was trying to climb a sport route on-sight. This required him to route read on-the-fly; taking in information and the affordances presented to him by the rock as he was climbing. His perception of these affordances and the solutions he was able to come up with were specific to his immediate physical abilities (including how pumped he was), but they were also limited by his imagination and existing repertoire of climbing moves.

Acknowledgements: There are so many people we spend time talking to and discussing ideas, both within academia and practitioners in the field. The conversations, the research, edits, re-edits and proofreads are all such an important part of the process. We would like to say thank you to Eric Brymer for his proofreading and suggestions.

We'd love hear what you thought of this article. It's good to know if all our hard work is appreciated and how we can do better :) Cancel reply

This site uses Akismet to reduce spam. Learn how your comment data is processed.

Dynamics Coaching
@_UKCoaching ambassador @MorrisCraig_ brings so many great coaching principles to life.
Linking to my current focus on show jumping I was fascinated by Craig’s articulation of the similarities between elements of the sports and how his coaching has shifted over time. The similarities will also resonate with climbers, slalom skiers, and other sports where you observe a pre-set course, then perform on it.
Lots to consider around -
- what are you noticing / paying attention to
- being prepared-not-planned
- staying response-able to what is in the moment.
- being adaptive
- co-creation and safe learning environments.
Thank you @ShakeyWaits for another brilliant podcast!

Dynamics Coaching
This will be a fascinating and thought provoking session from Tom and his guests.

Dynamics Coaching
Hopefully find a translation of this.